Last week, an AmCham EU delegation of 60 members travelled to the European Parliament in Strasbourg. On Monday, 4 July and Tuesday, 5 July, participants had the chance to meet with more than 100 MEPs from the largest political groups in the Parliament. An AmCham EU tradition of over twenty years, the Strasbourg delegation brings together the US business community and European policymakers to discuss how to build a stronger European Union and a more competitive single market. 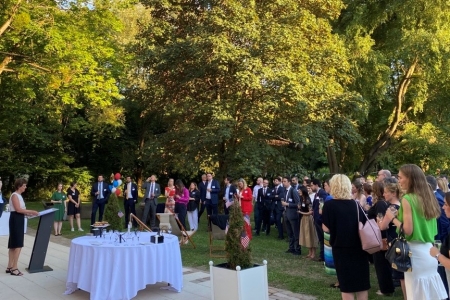 This year members looked to make up for lost time after a two-year in-person hiatus, following a busy schedule throughout the two days. The program featured high level speeches, an informative panel discussion, a walking dinner with political insiders and a series of intimate meetings with MEPs and their staff on the current status and future of key EU legislative files. .

The delegation kicked off day one with a keynote address from Klaus Welle, Secretary-General, European Parliament, who reflected on his thirteen-year tenure. He also shared his perspective on the institution's current challenges, as well as the role the Parliament should play in the future.

The first day continued with a panel discussion with prominent MEPs, both to assess the progress of the first half of the legislative term and the priorities for the second half with a look ahead to the 2024 European elections. The panel featured Anne-Michelle Asimakopoulou (EPP, EL); Damien Boeselager (Greens/EFA, DE); Svenja Hahn (RE, DE); and Brando Benifei (S&D, IT) and was moderated by Alberto Zilio (AT&T), Chair, European Parliament Outreach Task Force, AmCham EU.

Monday concluded with a walking dinner to celebrate US Independence Day, which brought together members of the US business community with MEPs and their staff. Susan Danger, CEO, AmCham EU, spoke about the continued importance of the transatlantic relationship for building more resilient and more prosperous economies on both sides of the Atlantic.

The second day of the delegation was dedicated to advocacy meetings with MEPs on topics including digital economy; transport and energy; environment; trade; healthcare; responsible business conduct; agriculture; finance and sustainable finance; intellectual property; and space and defence. Overall, the meetings confirmed that AmCham EU must continue sharing its positive message with MEPs so that legislators can understand the concerns of companies in key policy areas.

In our current geopolitical environment, business, civil society, and government needs to work side by side to address our common challenges and bring Europe forward, both at the EU and Member State level. AmCham EU and its members are ready to do their part to keep the European Union one of the most attractive regions in the world not only to do business, but also to live, study, work and raise a family.