On Thursday, 2 October, AmCham EU presented Jean-Claude Juncker, President of the European Commission, with a Bridge-Builder Award at its annual Gala evening. 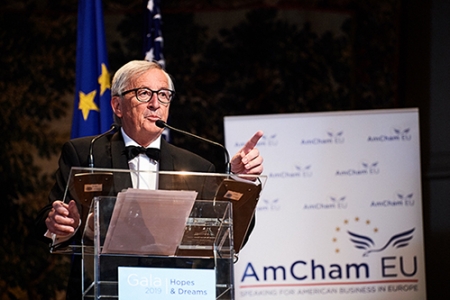 The award formally recognises the President’s extraordinary achievements over the course of his tenure. President Juncker has striven to maintain and strengthen the unity of the EU through difficult times and crises. He has also demonstrated an unwavering commitment to the transatlantic relationship. His outstanding diplomatic skills and personal efforts were instrumental in de-escalating tensions between the EU and the US.

Susan Danger, CEO, AmCham EU, stated: ‘American companies in Europe wanted to recognise the President’s continued leadership, particularly with regard to the unity of Europe and transatlantic relations.’ She went on to say: ‘In an increasingly complex and polarised world, our societies need bridge-builders more than ever. Bridge-builders are exceptional individuals who are able to connect with those who may disagree, find common ground and build consensus. Ultimately, they make a real difference because they bring people together.’

Watch the award ceremony and the President's full remarks here.