On Thursday, 1 November Susan Danger, CEO, AmCham EU spoke at a Chatham House event in London. With more than 120 participants, including policy-makers and representatives from civil society, academia and business, the discussion focused on Global Trade in 2018. 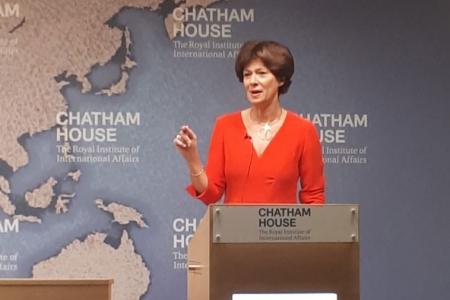 Susan spoke during the second session on ‘The State of Global Trade – Bright Spots and Structural Risks’. The session addressed the current state of global trade, examining the macroeconomic picture, who the systemic players are and the potential for new trade agreements to alter the current landscape. The dynamic panel provided perspectives from the United Kingdom, Switzerland and Japan on current global trade challenges such as a possible UK-US trade agreement, Brexit, the position of the World Trade Organisation (WTO) and the recent EU-Japan trade agreement.

Susan brought the EU and US perspectives to the discussion, offering an AmCham EU outlook on the state of trade in the EU and in the US. In particular, she discussed the current trend towards protectionist measures and their implications across the EU, US and globally. She presented a view into the EU’s trade liberalisation approach, and the difference this poses from the US and their interest in bilateral versus multilateral agreements. Finally, she touched upon current trade tensions between the EU and the US, and ways to move forward with a more positive agenda.

Read more about our work on trade