Home » The Case for Investing in Europe conference

The Case for Investing in Europe conference

Global business leaders, representatives from the investment community and government officials came together on Wednesday 24 June for The Case for Investing in Europe conference to discuss why Europe remains a key location for foreign investment and how we can maintain this going forward.

View The Case for Investing in Europe 2015 report here

View our video message from David O'Sullivan, EU Ambassador to the US, here 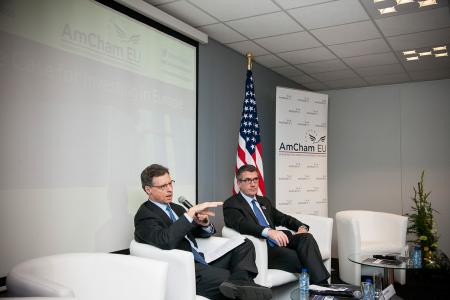 The conference was kicked off by Karl Cox, Chair of AmCham EU, who laid out AmCham EU’s case for investing in Europe: while recognizing the challenges that Europe faces, there are still underlying attributes that should not be forgotten. He praised the adoption of the European Fund for Strategic Investments (EFSI) as an important step toward keeping the European economy competitive, and highlighted continuing structural reforms in many Member States and completion of the single market as other necessary steps.  Action and the courage to take hard decisions is needed.

De Bock spoke specificically on the situation in Belgium: currently the country ranks 5th in Europe at attracting investors but 14th when it comes to turning these investments into jobs. There have however already been many structural efforts in Belgium to improve this, such as reducing the deficit of the budget; delaying the retirement age; reducing wage costs, shifting taxes from labor to capital etc. These efforts are reflected in the fact that consumer confidence is increasing and the unemployment rate is decreasing.

Joe Quinlan presented The Case of investing in Europe 2015 report and looked back over the past three years. He explained why investors come to Europe and focused particularly on the ease of doing business here.

Speaking on the recent granting of Trade Promotion Authority in the US Congress, Quinlan stated that TPP would be done by the end of the year whereas TTIP would last for another decade. That being said TPP would pave the way for TTIP.

Aongus Hegarty, gave a general overview of the economic state of play across Europe since the downturn started five years ago, stating that the past 18 months had seen a good increase in growth due to low interest rates and improved access to capital.

Further to this energy costs have come down and the devaluation of the Euro is making exports more competitive than they were.

A challenge that we face in Europe however, is that of having the innovation, yet exporting it to the US for manufacturing.

Hegarty stated that we have a great opportunity in Europe right now with TTIP. It will enhance growth and development and allow companies in Europe to expand and hire more employees.

Panel I: Europe, number one destination for investment? Perspectives from across the globe

This panel focused on the two themes of human capital and structural reforms. There was strong agreement that the European workforce was one of its most attractive assets. By having access to such a highly skilled workforce in a relatively stable environment, companies looking to invest in Europe know that their financial capital will be matched and amplified by the human capital.

There is a need to create smarter industrial policy to incentivise European ideas to stay in Europe. Right now, inventive leaders are too often leaving for more innovative regions or, if they stay, the manufacturing takes place outside of Europe. By focusing on creating more flexible markets at the national level and finishing the Single Market at the European level, structural reforms are showing signs of success. There have been larger investment inflows as companies realise that Europe is making it easier to do business.

The Digital Single Market (DSM) was a point of emphasis as well. Europe’s digital infrastructure is strong, but there are still too many market barriers across the continent. Creating the DSM would open up new markets for many new companies and allow them to compete in the modern economy. The importance of transparency, both in policy-making and in business, was also stressed.

Commissioner Bieńkowska welcomed the publication of The Case for Investing in Europe 2015 report. She underlined that FDI creates new jobs and that this is exactly the objective of the European Commission.

The Commission is committed to resist protectionist temptations - 31 million jobs are supported by exports and TTIP will be a cornerstone in this regard. Commissioner Bienkowska is confident that EU health and environmental standards can be maintained while having the TTIP agreement set the standard for the rest of the world.

The Commissioner concluded with a call to business to help the Commission make Europe a more attractive investment climate by being vocal on projects supported by the EFSI.