This year’s Transatlantic Week, themed ‘Troubled waters? Bridging the transatlantic gap,’ was set against the backdrop of an announcement by the US government to impose tariffs on steel and aluminium on countries around the world.

AmCham EU released a statement in response to the announcement, expressing its concern over unilateral action by the US.

The week’s activities opened on Wednesday, 7 March with a reception held at the European Parliament and hosted by Jeppe Kofod MEP, who spoke about the enduring value of the transatlantic relationship despite political differences that have arisen over time.

The reception was well-attended by several MEPs including Bernd Lange, Chair of the International Trade Committee of the European Parliament. The event also served as the official launch of the Transatlantic Economy Report 2018, which includes the latest facts and figures about the EU-US economic relationship.

AmCham EU also welcomed colleagues from the AmChams in Europe network for the annual Brussels Briefing, including a two-day programme of best practices sessions and policy briefings.

The week culminated with the Transatlantic Conference on Friday, 7 March, with panels and speeches by top government and business leaders including: Jyrki Katainen, Vice-President for Jobs, Growth, Investment and Competitiveness, European Commission; Jean-Baptiste Lemoyne, Secretary of State, Ministry of Europe and Foreign Affairs, French Government; and Jean-Pierre Clamadieu, CEO, Solvay.  The US government perspective was presented by Manisha Singh, Assistant Secretary of State for Economic and Business Affairs, US Government. Some expressed concern that Washington’s tariffs plan could create trade barriers that could have far-reaching ramifications on the global economy.

Finally, the Transatlantic Business Award was presented to Věra Jourová, European Commissioner for Justice, Consumers and Gender Equality for her exceptional efforts to enhance transatlantic cooperation and her instrumental role in the conclusion and implementation of the EU-US Privacy Shield.

See the highlights from the event 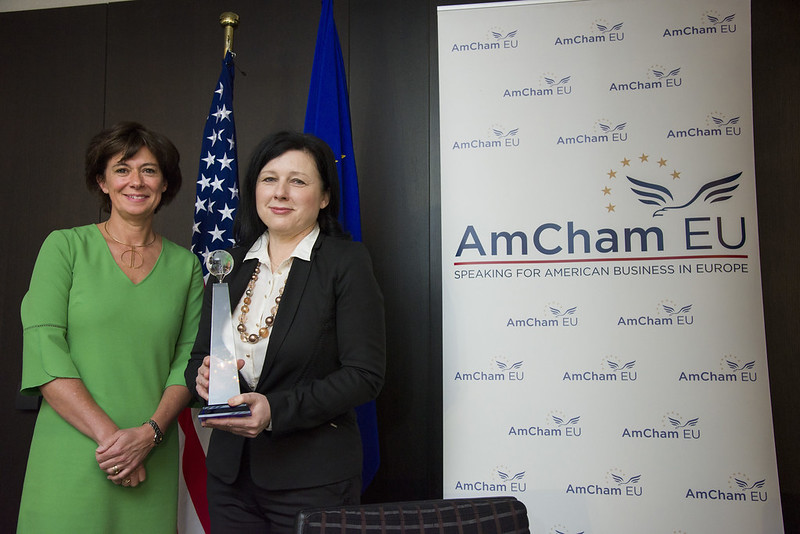