Ambassador Georges Friden outlines the priorities of the Luxembourgish Presidency

In a presentation to AmCham EU members on 6 May 2015, Ambassador Georges Friden, Deputy Permanent Representative of Luxembourg to the EU gave an overview of the preliminary programme of the Luxembourgish Presidency of the Council of the EU, starting 1 July 2015. 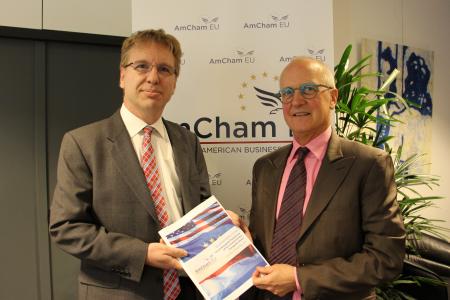 This is the twelfth time Luxembourg will hold the Presidency and it is keen to again leave its mark on a number of key files. In particular the Ambassador highlighted the importance of pushing member states to further complete the Single Market through more harmonisation and mutual recognition. The Ambassador spoke just as the European Commission launched the Digital Single Market, and he stressed the importance of the Strategy, as it underpins all future growth. The Energy Union will also be on the Presidency’s agenda as well as working toward a more ambitious trade policy. Other items mentioned by the Ambassador were the areas of environment and climate change, given that the Presidency will lead the EU delegation at the COP21 in Paris in December. AmCham EU looks forward to continuing working with the Luxembourgish Presidency in the coming months and in particular to the meetings with government officials in Luxembourg in June.