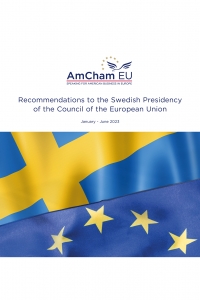 AmCham EU welcomes the Swedish Presidency of the Council of the European Union, which comes at a difficult time for the EU and the world. The volatility of the external environment is a serious concern for American companies in Europe, alongside the war in Ukraine, the energy and food crises, staggering inflation levels and the disruption of global supply chains. However, nothing should derail us from our unwavering support for the people of Ukraine. AmCham EU continues to condemn the war, which violates international law and poses a clear threat to the fundamental values of human dignity, rule of law and democracy. The Swedish Presidency takes on a critical task in supporting the development of an outward-looking industrial strategy in Europe, one that relies on the twin digital and green transitions.

Our recommendations to the Swedish Presidency aim to raise issues that are vital to shaping a strong and competitive EU and provide concrete input and direction to the Presidency’s work programme over the coming six months. AmCham EU looks forward to working closely with Sweden during its Presidency to ensure we reach our common objectives of a strong, green and digital economic recovery.