The 15th edition of AmCham EU’s Transatlantic Conference kicked off on Wednesday, 24 March. This 2021 edition, which is completely digitised, will take place in three instalments between Wednesday, 24 March and Friday, 26 March. The theme for the first day of the conference was the transatlantic trade agenda. Opening remarks from Susan Danger, CEO, AmCham EU and Zeger Vercouteren, Chair, AmCham EU (J&J) set the tone of optimism for intensified cooperation between the EU and the US, as the new US administration pivots back towards Europe. 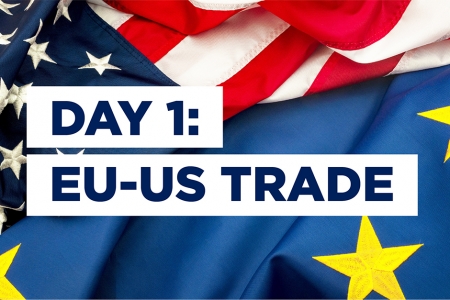 The beating heart of global cooperation

The programme got underway in earnest with an opening keynote address by European Commission President Ursula von der Leyen. She stressed that the two sides of the Atlantic are once again speaking the same language, of cooperation in international affairs; free enterprise and fair competition; science-based policy making; and common democratic values. She pointed to the recent agreement to temporarily suspend all tariffs in the aircraft subsidies dispute as a sign of the goodwill felt on both sides. She underscored that now is ‘time for the Atlantic to once again become the beating heart of global cooperation’. Read the transcript of President von der Leyen's speech here.

The second session of the day was a presentation of the newly published Transatlantic Economy 2021 report by co-authors Dan Hamilton of the Austrian Marshall Plan Foundation and the Woodrow Wilson International Center for Scholars; and Joe Quinlan of the Transatlantic Leadership Network.

They conveyed that even in an extremely difficult year, the transatlantic partnership is thriving. The transatlantic economy remains the motor which drives the global economy, with both economies expected to rebound strongly from economic recession in 2021.

They reiterated importance of the EU-US investment relationship as the primary measure of the transatlantic partnership: their report notes eight indices of deep integration which highlight this most important economic relationship, including sales, assets, employment and R&D spending of foreign affiliates, to name but a few.

Time to renew our vows

A range of subjects including tariffs, supply chains, multilateralism and China were discussed. Radosław Sikorski, MEP noted his hope for a more constructive relationship between the US and the EU, given the return of an Atlanticist to the White House. Ambassador Hanney conveyed his belief that the EU and the US could align on their engagement with China, by prioritising business needs. Denise Rutherford and Selina Jackson were both agreed that supply chain resilience is best instituted at the multilateral level, as opposed to unilateral measures intent on re-shoring.

Selina Jackson likened the transatlantic relationship to a marriage, noting that we have gone through a difficult period over the last few years. Now we must double down on our commitment to one another for the sake of the future – by renewing our vows and regaining each other’s trust.

Join us for day two!

Day two of our Transatlantic Conference 2021 will kick off at 14.00 CET on Thursday, 25 March. The discussions will focus on sustainability and climate change. Join us on our digital platform, or follow the event on Twitter: #Transatlantic2021.