As part of our monthly Town Hall series, AmCham EU joined forces with AmCham France on Tuesday, 8 June to welcome Clément Beaune, French Minister of State for European Affairs for a timely run-down of France’s priorities as the country prepares to take the helm of the Presidency of the Council of the European Union. 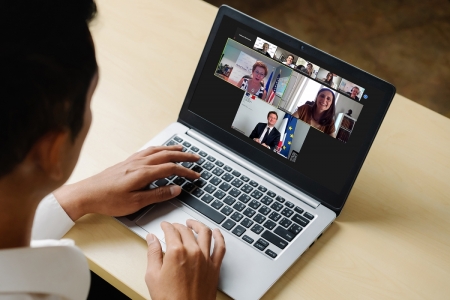 After a networking session, the Town Hall began with a short introduction by Susan Danger, CEO, AmCham EU, which was then followed by Clément Beaune’s opening statement. The discussion was moderated by Eglé de Richemont, Directrice Générale, AmCham France.

The discussion centered on the efforts undertaken by the European Union to navigate the COVID-19 crisis, having adopted ambitious measures to mitigate the pandemic’s economic and social impacts, to then setting in motion a European recovery that would seek to secure long-term stability. The topic of EU-US cooperation was discussed, for which it was highlighted that both sides can work together to increase the level of convergence on common issues in the years to come.

As an organisation that is committed to emboldening the Transatlantic Relationship, AmCham EU identified areas in which the EU and US can build a strong partnership and seize the momentum. Read more about it in our recent paper on ‘Emerging areas for EU-US cooperation’, as well as in this year’s edition of the Transatlantic Economy Study.

If you should have any questions on the Town Hall series, do not hesitate to contact Roberta Brumana (RBR@amchameu.eu).