Home » MC12: the ingredients to make it a success

MC12: the ingredients to make it a success

After being postponed last December due to rising COVID-19 rates, the twelfth Ministerial Conference of the WTO will take place in Geneva between 12-15 June. The Ministerial will take place under challenging and divisive circumstances, including the remaining effects of the COVID pandemic and the devastation caused by the war in Ukraine. These and other issues will make it difficult for the Ministerial to make progress towards an agreed common statement. Regardless, as US business in Europe, we emphasise the importance of the WTO as a pillar of the rules-based multilateral trading system and a stabiliser and unifier for international trade. 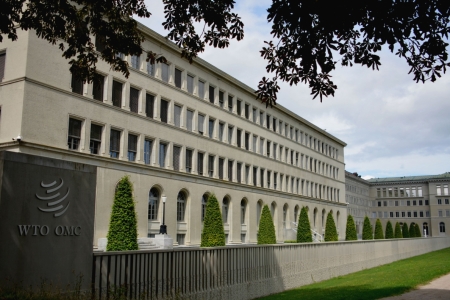 The WTO has undoubtedly helped open up international markets and raise global standards. For instance, between 1995 and 2011 alone, more than 400 trade disputes were brought to the WTO, which on average took only ten months to resolve in panel proceedings. Negotiations and agreements like these have allowed trade to open and flow more freely, which, in turn, has boosted annual incomes and provided a wider range of goods and services available to consumers. Its role as a guarantor of a rules-based trade system for governments, companies and consumers, is indispensable.

Despite the difficulties that the currently WTO faces, it is clear that it can aim for tangible achievements, specially in events like the upcoming Ministerial. In this regard, AmCham EU urges for action on key areas.

The first priority should be renewing of the Moratorium on Customs Duties on Electronic Transmissions, so that it can ideally become permanent in the future. Since 1988, ministerial conferences have consistently renewed this moratorium, which prevents tariffs from being placed on electronic transmissions. Failing to renew it at MC12 would represent an unprecedented lapse in capacity for the WTO. The inclusion of tariffs on electronic transmissions would also raise prices, hinder consumption, slow economic growth and further diminish WTO leadership at a critical time.

The second priority should be to address the concrete challenges of vaccine distribution. The latest data shows that the production of vaccines outpaces the rate at which they are being administered. The focus now should be on overcoming the practical difficulties of vaccine coordination and handling vaccines and vaccine hesitancy, which limit their uptake. Last year, Susan Danger, CEO, AmCham EU said  ‘An IP waiver will not improve the distribution of vaccines to citizens around the world’.

Lastly, the WTO must undergo reforms that will make it fit for the 21st century. Reform is an issue that AmCham EU had also called for before the postponement of MC12 last year. The importance of the WTO’s capacity to provide a forum for negotiation, its role as a monitor of the rules-based trading environment and the need for it to act as a pillar of the multilateral trading system cannot be understated. The EU and US must take leadership at this Ministerial and beyond to strengthen the monitoring role of the WTO secretariat, revitalize the negotiating function and restore the Appellate Body to functioning order.