Home » Checking in from #EPPRotterdam

Last week a delegation from AmCham EU’s European Parliament Outreach Task Force attended the 27th EPP Party Congress in Rotterdam, Netherlands from Tuesday, 31 May to Wednesday, 1 June. The Congress was highlighted by the election of Manfred Weber as the next EPP President, who takes over the role from Donald Tusk. The delegation had the pleasure of speaking with many party members during the two days including Donald Tusk, former President of the EPP; Roberta Metsola, MEP (EPP, MT) and President of the European Parliament; Simona Busuttil, Secretary General, EPP Group and many more influential guests including other MEPs, Commissioners, Prime Ministers and Member State politicians. 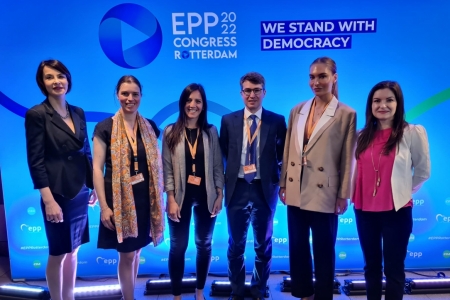