Home » AmCham EU Visit to New York and Washington, DC: Assessing the political climate and its potential impact in Europe

AmCham EU Visit to New York and Washington, DC: Assessing the political climate and its potential impact in Europe 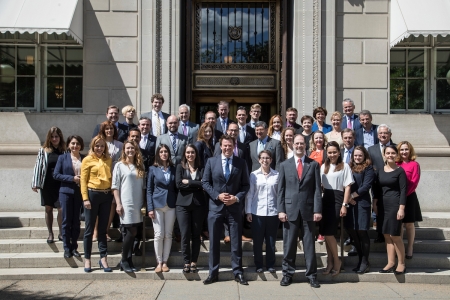 While there, Ms Danger spoke on a panel for AmCham Ireland’s ‘Transatlantic Conversation’ event with the International Irish Business Board, which focused on the theme of ‘The Global Mind-set’. While there, Ms Danger had outreach meetings with British American Business, the United States Council for International Business and AmCham Finland’s New York Office. Ms Danger also attended AmCham Ireland’s business report launch and met with EU Ambassador to the UN, João Vale de Almeida and Klaus Sorensen, former European Commission Director-General.

The following week, Ms Danger and Tim Adamson, Senior Policy Adviser joined the AmChams in Europe delegation to Washington, DC from 8-9 May. They attended briefing sessions with the US Chamber, US Department of Commerce and Washington insiders at Hill & Knowlton and Beekeeper group. The US Chamber also hosted a reception at their offices for the AmChams in Europe, featuring an address by Dan Mullaney, Assistant USTR for Europe and the Middle East.

While in Washington, the CEO also attended a series of meetings throughout the rest of the week with government representatives, including: the Departments of State and Commerce, the United States Trade Representative, and a series of meetings on the Hill. They also met with the EU Ambassador to the US, David O’Sullivan, and attended the Europe Day reception at the Ambassador’s residence.

The CEO also met with various business organisations and think tanks, including the German Marshall Fund of the United States, the National Association of Manufacturers, the Organization for International Investment, the Cato Institute and the Hudson Institute.

AmCham EU will be returning to the US 26-30 June with a group of members for its annual Washington, DC Delegation Visit.