Key stakeholders from the world of government, business, academia and civil society come together for “Transatlantic Week 2015” to discuss key issues facing the transatlantic economy as well as the potential benefits of the proposed Transatlantic Trade and Investment Partnership (TTIP) agreement between the EU and the United States. 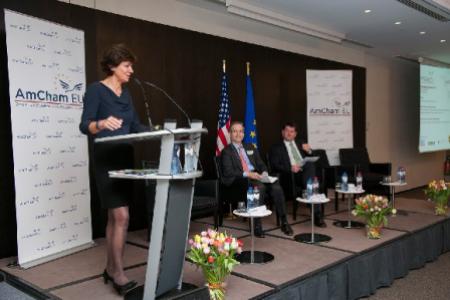 At the reception to kick off Transatlantic Week on Wednesday evening, Jean-Luc Demarty, Director General of DG Trade at the European Commission, delivered remarks on the significance of EU-US trading relations to the European economy. The reception also saw Joseph Quinlan, of the Johns Hopkins University, launch the Transatlantic Economy 2015 surveying jobs, trade and investment between the United States and Europe. This can be viewed here.

At the conference on Thursday, US Ambassador to the EU The Honorable Anthony L. Gardner and Dara Murphy TD, Irish Minister for European Affairs and Data Protection, delivered keynote addresses on the longstanding importance of transatlantic relations and the opportunity to deepen these ties through TTIP. Thought-provoking and productive debates were then held on four key issues related to the transatlantic economy: The Digital Market, Energy Cooperation and Energy Security, Healthcare in TTIP, and Financial services.

Key themes that emerged from these debates included the significance of strengthening EU-US economic and strategic relations in a time of increased globalisation, the growth of emerging markets in Asia and Africa, and sluggish growth in Europe. Panellists and participants discussed the gains and opportunities that TTIP in particular could offer to boost the transatlantic economy and enhance its position as the most integrated economic relationship in the world.

View photos of the week here

Watch video statements of several speakers at the Transatlantic Conference

In his opening address The Honorable Anthony L. Gardner, US Ambassador to the EU reiterated his support and admiration for the work of AmCham EU and stated that he looked forward to continued collaboration. He mentioned the three areas of focus for his term: TTIP, the Digital Economy and the Energy sector and explained that the US is particularly deeply committed to working together with private businesses in these areas. Read the speech in full here.

Dara Murphy TD, Irish Minister for European Affairs and Data Protection opened with remarking on the importance of the transatlantic relationship not only in economic terms but also at a very local level. He stated that the broader benefits of TTIP needed to be clearly communicated to ordinary citizens in both the EU and US but that he was confident that this would be realised.

Joe Quinlan, Senior Fellow, Center for Transatlantic Relations, Johns Hopkins University, next presented on the findings of the Transatlantic Economy 2015 report which he co-authored with Dan Hamilton. He mentioned that four countries in particular have received the greatest share of US FDI: Ireland, Luxembourg, the Netherlands and the UK. He reiterated his belief that TTIP is the best partnership to drive growth in both economies but that the focus needs to be put on SMEs who stand to gain the most.

Panel I: Towards a transatlantic digital market

The ‘Towards a transatlantic digital market’ panel focused on EU-US cooperation on digital issues. The digital economy between the EU and the US is deeply integrated and companies, whether European or US, operate as global companies using Internet based services and ICT products to serve their customers, users and gain scale. In the panel discussion it was highlighted that both sides of the Atlantic stand to gain a lot from common frameworks and standards going further. At the moment the EU and US are in different phases in regard to their respective digital economies, mostly because in the EU there are several factors that have hindered more integration of the market. The reasons for this are numerous but mostly because of the different member states with different approaches and legal frameworks. Several of the speakers highlighted that the EU’s objective of working towards a Digital Single Market will be very important in modernising the legal framework in the EU and allow the full deployment of new technologies all over the EU. Another point that was highlighted was interoperability between the EU and US. When it comes standards both sides need to be more in sync and these should not act as barriers. Finally, all of the speakers were in agreement that the EU and US must work together on building a Transatlantic Digital Market sooner rather than later given the increased competition from other parts of the world.

The panel discussed how transatlantic cooperation on some of the pressing energy challenges can be beneficial to both the EU and the US.

At the healthcare panel, it was stressed that one of the key outcomes of TTIP would be the further improvement of transatlantic regulatory cooperation on healthcare. Such cooperation is a necessary development for the industry which, in order to stay efficient and at the forefront of innovation, must continue to adapt to the demands of an increasingly globalised marketplace. This would lead to faster access, lower cost and more choice for EU citizens to a range of healthcare services and products, without a reduction in regulatory standards on either side of the Atlantic. Panellists stressed that public health services are explicitly outside the scope of the TTIP negotiations.

·       Michael Pedroni, US Treasury Representative, US Mission to the EU

The panel stated that close cooperation between the EU and US authorities on financial services regulation is essential, especially given the large amount of new rules implemented in recent years. Maintaining regular dialogue between regulators on either side of the Atlantic can help unblock access to credit for companies seeking to invest and could make the EU and US the global standard setters in this area.