Despite the changing times and the modernisation of societal values, we are still a long, long way from gender parity. That is why this International Women's Day, I am choosing to challenge.

This is a man’s world

‘This is a man’s world’, James Brown sang in 1966. Sadly, 55 years on in 2021, these lyrics still ring all too true. In our world today, husbands can still legally prevent their wives from working in 18 countries, according to the UN department of economic and social affairs (DESA). Meanwhile overall participation of women in the workforce remains dramatically lower than that of men. Under half of all women of working age are in gainful employment, versus three-quarters of men. As a woman manager, I am particularly disheartened that women held just 28% of managerial positions globally in 2019.

Despite the changing times and the modernisation of societal values, we are still a long, long way from gender parity. Participation of women in the workforce globally has actually remained stagnant since 1995, according to the UN. 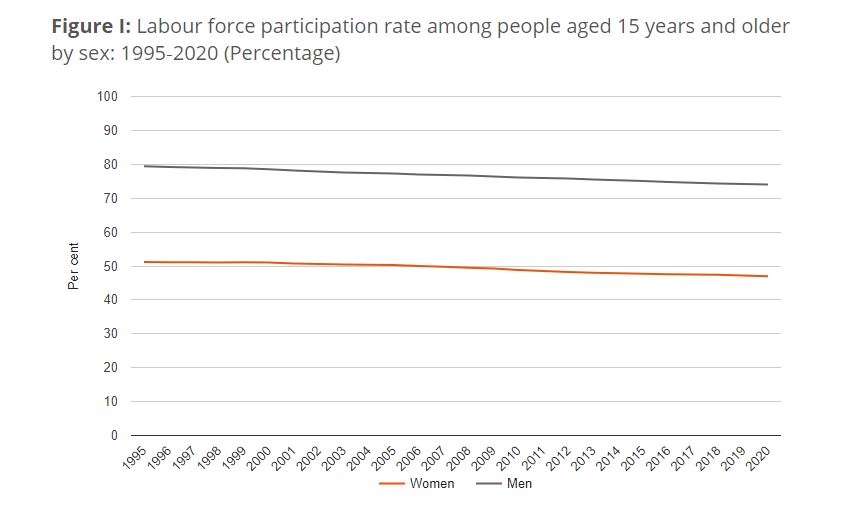 Compared to the world as a whole, the direction of travel has been more positive in Europe. A look at the SDG gender index for 2019 shows that only two of the top 10 country performers in gender equality came from a region other than Europe, while 14 of the top 20 are EU Member States. However, being comparatively better than the rest is not good enough.

Taking the example of academic performance, studies from the scientific community have consistently shown that girls outperform boys academically. It is an undeniable fact that girls earn higher grades across the board – even in those subjects thought to be more ‘masculine’, such as sciences. Throughout the EU, 54% of students in tertiary education are women. This figure rises to 57% for Master’s degrees. However, this does not translate to equivalent levels of participation in the job market: there still persists a difference of 11.6% between the number of men in the workforce versus the number of women in Europe today.

"How can it be possible that women earn 85 cents for every euro a man makes in 21st century Europe?"

Yet more concerning is the persistent gender pay gap. In Europe this currently stands at 15.7% according to the European Commission. How can it be possible that women earn 85 cents for every euro a man makes in 21st century Europe? Despite our higher educational attainments, women are overrepresented in low-paid jobs and sectors, while the path to career progression seems to be less linear. At the top levels of business, women account for under 20% of corporate directors in Europe. While progress towards gender diversity in leadership is steady, according to the Peterson Institute for International Economics, it would take an entire generation for parity to be achieved at the current rate of change.

Another arena in which women are grossly underrepresented is the political arena. There is an established and growing body of evidence that shows that women’s leadership in political decision-making processes improves outcomes. One study of the US Senate found women senators demonstrated more bipartisanship with their women counterparts from across the aisle than their male colleagues. In highly polarised times, seeking common ground is incredibly important. Yet, despite a wealth of virtuous examples, and despite representing 50% of the electorate, only 25% of the world’s parliamentarians are women. 21% of government cabinet members are women, and only 21 countries in the world have a woman as either head of state or government. Some 119 countries have never had a female leader.

Although Europe is one of the comparatively better performing regions in power parity, women only account for 32.2% of parliamentary representatives in Europe. The efforts at the European institutions are nonetheless a very clear signal to the Member States, with the 2019 elections resulting in a 40.4% share of women in the European Parliament’s hemicycle – the highest in EU history. The appointment of the first woman President of the European Commission, along with each of the College of Commissioners appointing a gender-balanced cabinet also represented positive progress in the right direction.

This International Women’s Day, let’s challenge the man’s world of a bygone era. Women have already proven we are the equal of men in terms of intellectual capability and leadership. Overcoming the barriers of opportunity to demonstrate our worth must now be the aim, in order to unlock the powerful potential of a new generation of leaders, and reconfigure our societies along more equitable and just norms.

One significant remaining barrier is that of perception. Gender stereotypes contribute significantly to the persistent gender gap, as expectations of an individual based on fixed norms ‘limit aspirations, choices and freedom’. Together we must combat these gender prejudices, by daring to call them out and overturn them. This International Women’s Day, I #ChooseToChallenge. Will you?